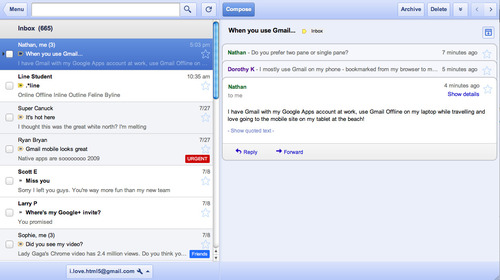 We use Gmail for everything (at least it seems like it) here in the office. In fact, the whole Google suite of apps and services is pretty instrumental in how smoothly things run from day to day. Google announced a new offline feature that allows you to work with Gmail, Google Calendar, and Google Docs without an Internet connection.

While this feature may not be useful for many of you urbanites (who have Wi-Fi coming out your ears), us rural folk are thrilled to hear this. This means I can take my iPad outside under a nice shade tree and work on my schedule without interruptions from social media sites and without worrying about toting along a HotSpot. That equals pure joy in my book.

“The great thing about web apps is that you can access all of your information on the go, and we’ve introduced ways to use Google Apps on a variety of devices like mobile phones and tablets. But it’s inevitable that you’ll occasionally find yourself in situations when you don’t have an Internet connection, like planes, trains and carpools.

When we announced Chromebooks at Google I/O 2011, we talked about bringing offline access to our web apps, and now we’re taking our first steps in that direction. Gmail offline will be available today, and offline for Google Calendar and Google Docs will be rolling out over the next week, starting today.

How will offline access affect your productivity?
Show original

This site uses Akismet to reduce spam. Learn how your comment data is processed.